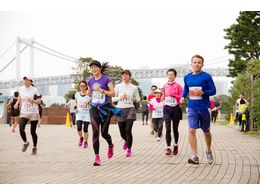 The global society has expanded women’s opportunities in society since Equal Employment Opportunity Act for Men and Women opportunity law came into effect.

Ms. Beate Sirota Gordon who contributed herself to the draft of the article of the the new Constitution of Japan about human rights and gender equality after the World War II, we succeed to her achievement and hold an awarding event as well as a running event for women who play an active part in a new era in and out of Japan.

Diplomats from various countries will run with you.

We recommend official events to runners who compete for speeds or records.